Birds ears are much simpler in structure to those of humans but they still enjoy a similar range of frequencies or pitch although they do have reduced sensitivity to loudness.

Barn Owls have some of the most sensitive hearing amongst wild birds giving them the ability to locate prey by sound alone. This exceptional ability is possible through several adaptations.

They have large facial discs that funnel more sound to the ears openings which are located at different heights on the head than each other helping to determine direction and distance to sound sources. The flight feathers of the wings have soft edges to them which allows them to fly silently to prevent alerting prey but more importantly does not interfere with their own hearing.

The ear openings in birds are just below and behind the eyes and are covered in a layer of feathers called auriculars or ear coverts. These ear coverts funnel sounds to the ear opening and down to the eardrum, a thin membrane stretched across the ear canal, similar to that in humans. In humans there are three bones, the stirrup, the anvil and the hammer that transmit vibrations from the eardrum to the membrane of the inner ear.

In birds there is just one, the columella, which transmits vibrations from the eardrum to the membrane across the oval window in the cochlea of the inner ear. The cochlea is a hair lined, fluid-filled chamber and the movement of the fluid caused by a pressure wave due to the vibration of the membrane of the oval window moves these hairs, or cilia.

The movement of these hairs excites nerve endings at their base to transmit signals to the brain where it is translated and interpreted as sound. There is another opening in the cochlea, the round window, which is covered by yet another membrane and this allows the pressure waves moving the cilia to dissipate. Also in the inner ear are the semicircular canals used to determine orientation and to regulate balance.

These canals, like the cochlea, are filled with fluid and have specially adapted sensory cells which transmit movements of the head to the brain which translates these into position. 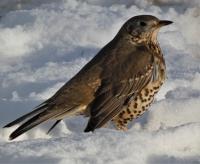