The ability to see is of vital importance to birds and is, arguably, their most important sense. They need precise information regarding the environment around them if they are to fly safely, find food and avoid predators. A bird's eye consists of two main chambers, each filled with a clear fluid, separated by a lens and a sclerotic plate, a ring of small bones. Muscles attached between the sclerotic plate, at one end, and the lens and cornea, at the other, can be flexed to alter the shape of the latter allowing focusing on a specific object possible.

A thin sheet of muscle, the iris, with a central opening, the pupil, can be altered to control the amount of light entering the eye. The iris contains pigments that give the eyes their colour.

Beyond the cornea a tough white layer, the sclera, surrounds the rest of the eye and gives it its general shape with the layer beneath that, the choroid, carrying nutrients around the eye within its rich blood supply. The inner surface of the eye, called the retina, contains rods and cones, densely packed light sensitive nerve cells and the fovea, a point in the retina where these cells are most densely packed leading to the sharpest images.

The cones are adapted to see colour in daylight and rods for night time or dim light conditions, so in nocturnal species, such as owls, the concentration of rods is higher. In some species of warblers, thrushes and Kestrel some cones are even sensitive to ultraviolet light which aids in searching for food.

A unique feature of the avian eye is the pecten, a structure containing a rich blood supply that protrudes from the retina into the rear chamber of the eye. It is thought to supply oxygen and nutrients to the retina which, unlike in humans, contains no blood vessels of its own. 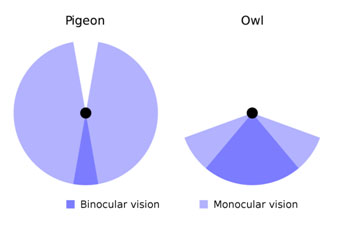 The majority of birds have binocular vision, similar to humans, in order to judge distance precisely. Binocular vision is where both eyes are able to see the same object, if only one eye can see an object it is known as monocular vision. Binocular vision is particularly well developed in raptors, like Hawks and Owls, which tend to have their eyes positioned more towards the front of the head; the Owl actually has forward facing eyes. Smaller birds tend to have their eyes positioned more to the side of the head allowing them to have better all-round vision in order to detect danger all around them.

Birds like Pigeons and Waterfowl have side facing eyes, which reduces the amount of binocular vision they have whilst increasing the area of monocular vision. With such limited binocular vision these birds rely on the difference in the apparent motion between objects at different distances. To explain, imagine you are on a train, the scenery nearer you moves by in a blur whilst far away objects hardly seem to move at all, some birds are able to use this difference to calculate distance. It may also explain why Pigeons move their heads to and fro and some wildfowl bob their heads frequently.

Birds eyes are much larger, in relation to their heads than in humans, which gives them the ability to discern fine detail. This visual acuity is better developed in some birds than others, a Starlings visual acuity is twice as good as in humans whilst a Sparrowhawks is 5 times as good. Another visual adaptation of Starlings is the ability to look down the length of its bill by rotating its eyes forward increasing its binocular vision and to help it judge the distance to food sources when foraging.

Further adaptations enjoyed by Owls, are elongated eyeballs into more of a tube shape, resulting in an increase of focal length, effectively turning the eyes into a pair of binoculars and large pupils able to gather more light. This allows Owls to see even small prey at distance and in dim light. It is only in complete darkness that this eyesight is of no help but their excellent hearing allows them to continue hunting even then.

It is even thought by some, although not proven, that some birds have nerve cells in the eye that are sensitive to magnetism giving them a visual compass.