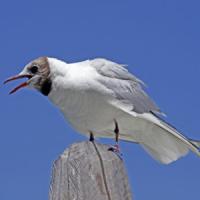 The Black Headed Gull is a typical Gull, it is by far the most common Gull of the region. The name is missleading as the adult birds have a Brown (not black) head.

The Black-headed Gull is the common Gull, so the 'Common Gull' is also miss-named, very confusing!

The Black–headed Gulls a very abundant breeding resident in the UK with over 150,000 pairs.The Black-headed Gull occurs in all counties throughout the UK. In winter numbers increase with migrant continental birds.

Black-headed Gulls occur in all habitat types throughout the UK, they breed on estuaries but also inland at gravel pits and similar wet areas. They can be seen in almost any habitat ranging from woodlands, parks, gardens, farmland, to rivers, canals and reservoirs. Black-headed Gulls will come into the garden for scraps of food.

Call notes; Gulls are noisy on breeding grounds. The most frequent call is a loud ‘Krreeaar’ going down in tone, repeated many times also single ‘kek’ and ‘kik’ sounds.