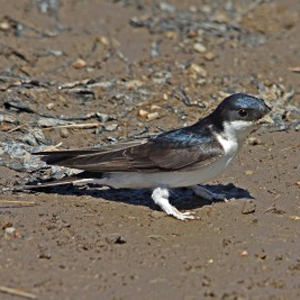 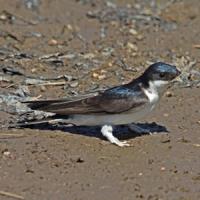 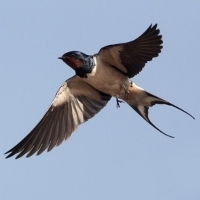 The House Martin is another summer migrant and familiar sight throughout the United Kingdom during our summer months. It is similar to the Swallow and belongs to the same group, the ‘Hirundines’,
It is a well known bird which, like the Swallow, is commonly found nesting under the eaves of houses and other suitable places. The House Martin spends about 6 months here, arriving in April and moving out in October.

The House Martin is a very abundant breeding summer migrant in the UK with over 400,000 pairs. The Swallow occurs in all counties throughout the UK.
House Martins start to arrive in April and leave in September/October.

House Matins occur in all habitat types throughout the UK, woodlands, parks, gardens, farmland, indeed any open country. They prefer to nest in towns and villages.

They are aerial feeders, taking a huge array of insects’ on the wing, they nest under eaves and other suitable overhangs.

Several call notes; most often a rattlely ‘prrripp’ which can be repeated, The alarm call is a stronger , louder dry ‘prryer’’
Song is a series of twitters and chips with no real direction or structure.