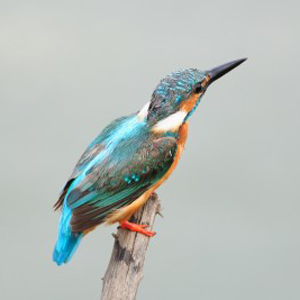 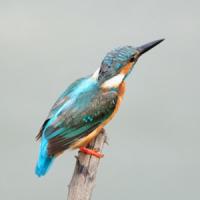 A flash of blue, gone in an instant, that’s the usual view of these fantastic little birds. The kingfisher must surely grab the prize for the most brightly coloured common British bird.
Made up of beautiful blues, turquoise, greens, orange and white, it is an absolutely stunning little bird. It inhabits clear running streams, rivers and ponds with overhanging vegetation.

The Kingfisher is a reasonably common breeding resident in the UK with around 5000 pairs. The Kingfisher occurs in all counties throughout the UK and Ireland but is absent in northern Scotland.
In winter numbers increase slightly as some continental birds come to winter here and
many of our resident birds move to the coast as cold winters freeze their usual haunts.

Kingfishers are water specialists, they nest close to clean rivers, streams, lakes and ponds. In winter they will move to other bodies of water like canals or coastal lagoons.
They feed almost exclusively on fish, but will also take small invertebrates

Call note; most often a hard loud penetrating ‘screeeee’’ generally given in flight.