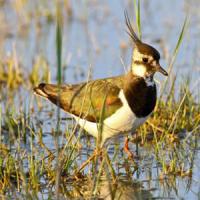 An instantly recognisable wader that is reasonably numerous in suitable habitat. It is the only British wader that sports a crest in all plumages and in both sexes. Lapwings are very adaptable and occur on coastal and inland sites in a wide variety of habitats. The Lapwing is also known as the ‘Peewit’ which is taken from the birds call.

The Lapwing is a very abundant breeding resident in the UK, however numbers have declined over the last 15 years and at present we have approximately 150,000 pairs.
The Lapwing occurs in all counties of the UK.

Lapwings occur in a variety of habitats from coastal marshes to farmland, moorland, heathland, mudflats and estuaries.
They are adaptable feeders taking a large variety of invertebrates, small fish, small amphibians and seeds/vegetable matter.

The most usual call is a loud drawn out ‘peeewitt’ – ‘chewittt’ . Display flight/song is a loud and similar to call but longer…’cheww…wit..wit…wit..chewowitt. 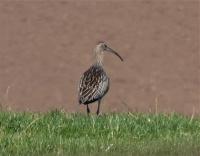