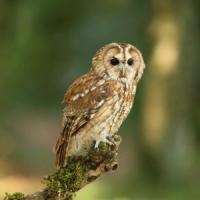 The Tawny owl is by far our commonest breeding Owl, outnumbering the Barn Owl by 10-1 and Little Owl by 2/3-1.

Unlike Barn and Little’s which can be seen frequently during daylight hours, the Tawny is strictly nocturnal and difficult to see unless you are lucky enough to find a roosting bird during the day.

The Tawny Owl is a very common breeding resident in the UK with over 50,000 pairs. The Tawny Owl occurs in all counties throughout the England, Scotland and Wales but is absent Ireland. (A few pairs recently found breeding in eastern Ireland)

Tawny Owls occur in all habitat types throughout the UK, woodlands, parks, gardens, farmland, hedgerows indeed any open country habitat with suitable scrub. They prefer broadleaf woodland for nesting purposes but will hunt by night in many habitat types.

Tawny Owls use sit and wait tactics for hunting, using a favourite perch to observe from.

In the garden Tawny Owls may perch close by a feeding station waiting for small rodents to appear, eating spilt seed etc...then swoop down to take them.

Keeping feeders stocked and throwing Seed Mixes on the floor may attract Tawny Owls to your garden as will putting up Owl Boxes for nesting. 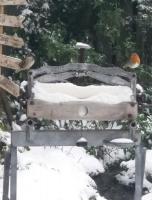