Date: 2015-01-29 09:23:51 | Category: Bird Watching | Author: David Cole
The plump character in our picture is familiar to everyone – it is the Robin (Erithacus Rubecula) - but things are not always what they seem. The robin is a deceptive little bird, with its bright red breast it is familiar throughout the year and especially around Christmas!

Males and females look identical, and young birds have no red breast and are spotted with golden brown. Male robins are noted for their highly aggressive territorial behaviour. They will attack other males that stray into their territories, and have been observed attacking other small birds without apparent provocation. Such attacks sometimes lead to fatalities, accounting for up to 10% of adult robin deaths in some areas.

The average life expectancy is 1.1 years – although a twelve year old robin has been recorded.

The adult bird weighs in a lightweight 16-22 grams, hence the deception created by the massive plumping up of the plumage in cold weather. 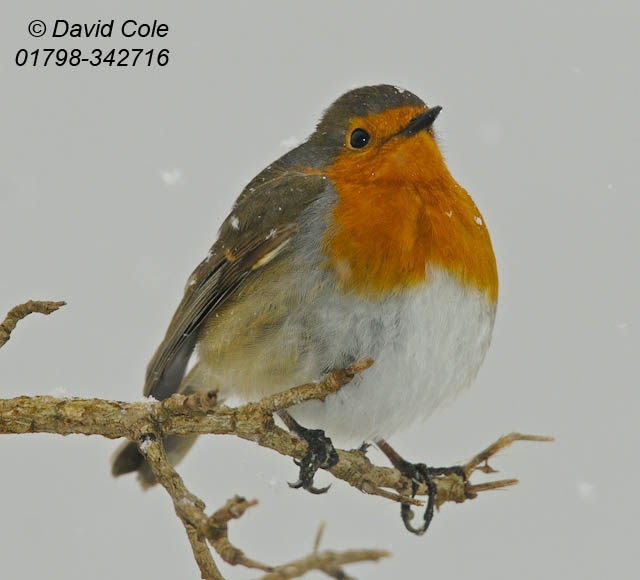 Robins may choose a wide variety of sites for building a nest, in fact anything which can offer some shelter, like a depression or hole may be considered. As well as the usual crevices, or sheltered banks, odder objects include pieces of machinery, barbecues, bicycle handlebars, bristles on upturned brooms, discarded kettles, watering cans, flower pots and even hats. The nest is composed of moss, leaves and grass, with finer grass, hair and feathers for lining. Two or three clutches of five or six eggs are laid throughout the breeding season, which commences in March.

They enjoy insects and have a special delight in finding TWOOTZ mealworms on the bird table.