Date: 2015-05-27 14:30:48 | Category: Bird Watching | Author: David Cole
The Jackdaw (Corvus monedula) is our smallest crow - smaller than a Carrion Crow or Rook but about the same size as a Jay. Like all the crows, Jackdaws are inquisitive and intelligent birds.

Adult Jackdaws are all black apart from their grey nape, shoulders and ear-coverts and light grey (almost white) eyes. The bill and legs are black.

Often arriving in numbers at a bird table – sometimes early in the morning - they regard any of the specialist feeders as a bit of a challenge, with larger beaks the fine mesh of feeders intended for smaller birds present few problems – a few well aimed thrusts and they are well rewarded. 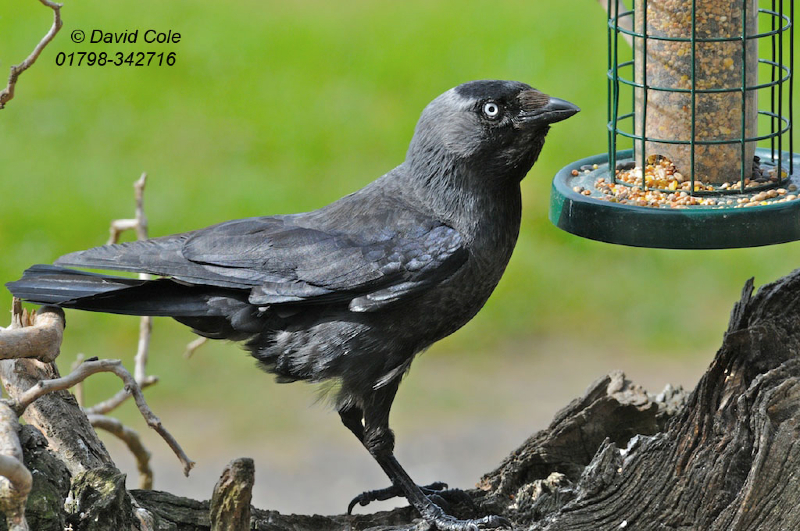 In the wild their diets are varied – anything from small rodents, worms, seeds, berries and they have even been seen picking dead insects off the front of parked cars – they are opportunists even in their nesting habits. Jackdaws will take over old nests of larger birds or use holes in trees and buildings. The nest is made from twigs and lined with hair, rags, bark, soil, and many other materials.

The corvines - crows, rooks, jays, magpies and jackdaws - are relentless stealers of other birds' eggs and chicks. During the nesting season they nest in medium-sized colonies of 20 or more birds, using church towers, mills, etc, indeed anywhere there is a cavity for shelter and shade, from where they will sally forth on foraging expeditions.

As a child in Kent more than sixty years ago I had a jackdaw (inspiringly called – “Jackie”) as a pet, and can confirm that they do imitate human speech and further more are attracted to shiny things for no understood reason – foil milkbottle tops were found in his nesting/night box – an old apple crate nailed to the outside of a shed – but he never brought back the gold ring of folklore!