Date: 2014-01-21 15:35:13 | Category: Bird Watching | Author: Neill Hunt
It has been a long long time since I saw my first ever Two-barred Crossbill, a female bird in Norfolk, way back in the winter of 1990. I hitch-hiked there and back and spent a pleasant couple of hours searching for it and eventually seeing the bird at Lynford Arboretum. As I recall, it took me an age to get home, not the easiest place to get to and from by thumb! 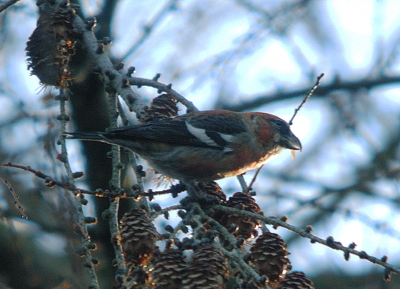 This winter has been a particularly good period for both Two barred and Parrot Crossbills so I thought I'd take a look at the group of 7 birds which have taken up winter residence at Broomhead Reservoir near Stocksbridge in South Yorkshire.

Previous records of Two-barred's amount to about 300 individuals so with a few 'flocks' dotted around the country it's definitely worth trying to catch up with them before they depart.

Sunday was a pleasant day, mild, dry and some sunshine, perfect for Crossbill hunting. We arrived to find several birders already watching the birds, so unfortunately the search was put on hold. We simply spent an hour admiring the gorgeous looking males (5) and a single female, there are 2 females in the area but we didn't see number two. These birds have, for whatever reason, chosen to depart their usual wintering grounds in north eastern Europe and grace Yorkshire with their presence. They are specialist feeders like our own Common Crossbill, concentrating all their efforts on cones of various species, a particular favourite is Larch. They are slightly smaller, much brighter and more agile than Commons, they show strong white wing bars and tertial markings. Whilst at the site we were lucky enough to come upon some commons as well, calling as they flew over, great.

We then head towards Budby Common in Nottinghamshire to try and locate the flock of Parrot Crossbills that have been present for a while, but, unfortunately we missed finding them. The habitat at Budby was superb and a trip in spring/summer looks like it would make for a fabulous day out. We did manage a to see a Green Woodpecker, which although reasonably common there is a really good bird in my regular South West Lancs birding area, so was nice to see. 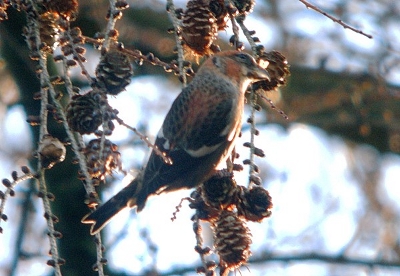 There are have been a few small groups of Two-barred Crossbills throughout the country with birds recently present in Yorkshire, Gloucestershire and Shropshire, so if you are in the vicinity why not go and have a look and compare them to our own Common Crossbills, you won't be disappointed.