Dippers are amazing creatures, small, dark and handsome. They are so unusual in the avian world as they are a passerine (song bird) that actually swim underwater, in essence they fly underwater like a penguin, when on the riverbed they then supposedly walk in search of prey. They search the bottom of shallow fast flowing rivers and streams for freshwater invertebrates, shrimps and insect larvae, their main diet.
It is the only song bird that swims underwater, throughout the world there are 5 species all sharing this unique ability, a very specialised species group indeed.
The British variety, the White-Throated Dipper to give it its full title is a small bird, no more than 20cm in length, they are a beautiful rich mahogany brown with a large white bib. The tail is short, legs long and eyelids white.
They fly on very stiff wings which beat rapidly and as it fly’s upriver it will often call, a repeated hi pitched trill…
The name Dipper comes from its habit of bobbing (dipping) its body when stood on small rocks, not from its habit of swimming. It also has a number of ‘local’ names, the Water Ouzel being one of them. 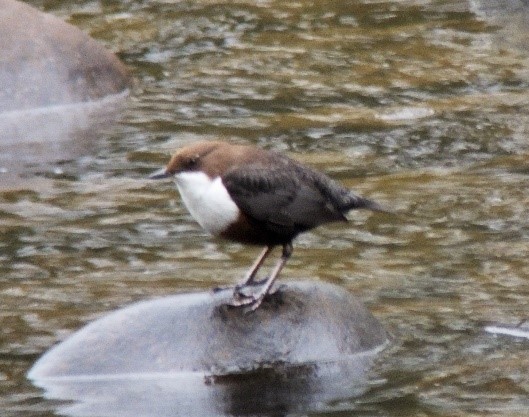 They are a fairly common breeding resident with approximately 12000 pairs in the UK. They breed on fast flowing stretches of rivers and streams and usually place their nest under a permanent structure such as a bridge or within cracks and hollows in rocks, the nest is constructed of moss. Unusually Dippers will often have 2 nests, 1 which is used primarily as a shelter and another simple nest which is extremely well hidden is used for egg laying.
They will usually lay up to 6 eggs and have 2 broods a year, the first brood is generally laid in April then another later in the season.
Many fast flowing streams and rivers in the UK will hold a pair of dippers, take a walk and see if you can find any, good luck.
Happy birding.