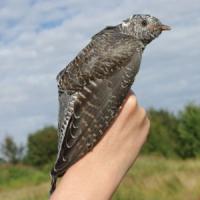 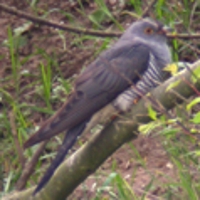 Many people think the Cuckoo is a small bird, however, in reality, it is over a foot long and in flight can look very falcon like.
It is perhaps better known for its typical ‘cuckoo’ call and for its parasitic behaviour. The cuckoo is a summer migrant.

In flight the long pointed wings never raise above the horizontal.

The Cuckoo is a common breeding migrant in the UK with over 15000 pairs. The Cuckoo occurs in all counties throughout the UK and Ireland
Birds start to arrive in April and head south to winter in Africa in September/October.

Cuckoos occur in all habitat types throughout the UK, woodlands, parks, gardens, farmland, Marsh’s, reedbeds indeed any open country habitat with suitable scrub.
Cuckoos are insect eaters and are partial to caterpillars and beetles.

Call / song note; Cuckoos have one of the most well known of all bird sounds, it gives a far carrying ‘coo coo’ sounding like its name.

The following food is favoured by Cuckoo