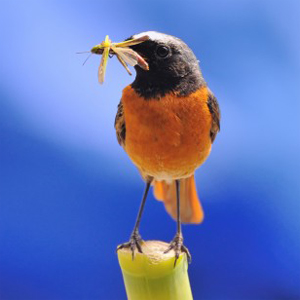 The Redstart is one of those birds that birdwatchers love to see in the Spring. The males are fantastic little birds. They can be quite secretive but with patience good views can be obtained. The mix of bright colours, loud call and secretive behaviour makes seeing one extra special.
Identification.

The Redstart is a common breeding migrant in the UK with 100,000 pairs. The Redstart occurs in all counties throughout the UK but is less frequent in Ireland.
Redstarts arrive from their wintering grounds in Africa from April onwards.

If you are lucky enough to get one in the garden Mealworms would be an ideal choice of food. Generally they are insect eaters.

Several call notes; most often is a soft whistled ‘huueet’ often repeated and a hard metallic ‘Tick’. Song is quite similar to Robins.

The following food is favoured by Redstart