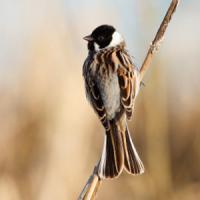 The Reed Bunting is a common breeding resident, it occurs in many habitats, from reed beds, marshlands and lakeside shrubs to arable farmland and gardens. The Reed Bunting is one of six Bunting species that breed in the UK, however three of these are far more localised.

The Reed Bunting is a very abundant breeding resident in the UK with 200,000 pairs. It occurs in all counties throughout the UK and Ireland.
In winter numbers increase as migrants come to the UK from Continental Europe to escape their cold winters, migrants start to arrive in October to winter in our less severe climate.

Reed Buntings tend to feed on the ground but will visit Bird Tables and Feeders, they occur in all habitat types throughout the UK, woodlands, parks, gardens, farmland, hedgerows and towns but favour wet habitats
If you can coax them into the garden they will happily take Seed Mixes from the ground or Bird Table.

The following food is favoured by Reed Bunting