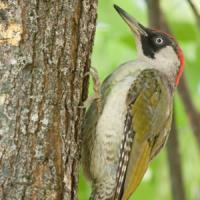 In a world where Jays and Goldfinches often take most of the credit for looking good, there's a contender whose striking red streak is just as impressive. We're talking, of course, about the much-loved Green Woodpecker (if you want to get technical with the Latin, it's Picus viridis. If you simply want to confuse a bird-watching friend and watch them squirm at repeating it, however, you could go with the Welsh almost unpronounceable version: Cnocell Werdd. Providing you can find out how to say it first, of course).

One of the best things about Green Woodpeckers is how they can be seen all year round. Only a week or so ago, as we entered November 2013, one landed in my garden and spent a whole hour stabbing at the grass with characteristic precision. I may not have got a lot of writing done that day - much as I love birds, the Green Woodpecker is the curious freelance writer's worst enemy! - but I did get to witness something very special.

Known for its expert foraging techniques and rocket-like, undulating flying pattern, catching sight of a Green Woodpecker is always a good thing. So, with no more ado, let's take a look at 3 amazing facts about Great Britain's largest woodpecker.

Number 1: They can hang off practically anything!

If you've spent a few hours watching Green Woodpeckers go about their secret business, chances are you'll be aware of one certain thing: this bird hangs out like no other. Capable of attaching itself to any surface with the slightest grip, it's not uncommon to see some of the more ingenious birds spending time on brick walls as well as trees. It's all down to those special feet, of course. Like other Woodpecker Species, two front-pointing toes and two back-pointing ones make the magic happen.

Number 2: This bird's tongue has to be seen to be believed

There are birds with tongues and then there's the Green Woodpecker. Thanks to thousands of years spent refining its ant-hunting technique, this bird has evolved with a 10cm long tongue which features barbs at the end - a tongue so long, in fact, that it has to be curled around its skull. Try and find a Goldfinch capable of beating that!

Number 3: This bird has a built-in helmet which is essential to its survival

If you spent much of your time banging away at trees with your nose, imagine how much of a headache you'd have at the end of the day! While the Green Woodpecker is mostly a ground-feeding spectacle - as we said before, the focus of its obsession is ants, ants and even more ants! - that doesn't mean it is any less equipped than some of the other Woodpecker Species out there. To deal with the trials and tribulations of life, the Green Woodpecker has developed a skull with its very own cartilage-cushion shock-absorber. This, combined with muscles that distance the brain-case from the beak at the moment of impact, takes the stress out and leaves the Woodpecker able to cope with the day ahead.