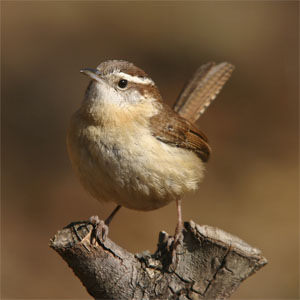 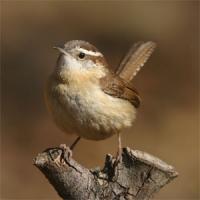 When you mention Wren to most people the first reaction is that it is Britains smallest bird, however that accolade belongs to the Goldcrest. The Wren is also very small bird, its Latin name ‘troglodytes’ means…cave dweller, this is a direct link to its nest, a small domed structure.

They will flick and jerk their tail and call regularly.

The Wren is an extremely abundant breeding resident in the UK with over 8 million pairs. The Wren is Britain’s commonest breeding bird. It occurs in all counties throughout the UK and Ireland. In winter numbers increase as migrants come to the UK from Northern Continental Europe to escape their cold winters, migrants start to arrive in October to winter in our less severe climate.

In the garden Wrens stay hidden but will take Insects on and around the Bird Table, most often they will stay low and feed from the ground.

Considering their size, Wrens have a massive voice!
Several call notes; most often a hard metallic ‘Tick’ sometimes repeated 3 or 4 times, also a short sharp rattle like ‘chrrrr’. Song is sung mostly from deep cover but will occasionally sing from an exposed perch.

The following food is favoured by Wren