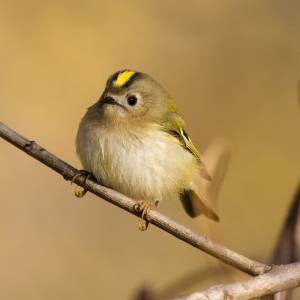 The Goldcrest is Britain and Europe’s smallest bird, measuring in at 8.5 cm and weighing just 5 grams (a 10p piece weighs 6.5grams!) This also makes it half the weight of the Wren, a bird that most people would call our smallest bird.

Goldcrests are a member of the Warbler Family but unlike the majority of Warblers summering in the UK, Goldcrests are resident breeders. Numbers increase in winter as birds cross the North Sea to escape the Northern European Winter climate.

The Goldcrest is a very abundant breeding resident in the UK about a million pairs. The Goldcrest occurs in all counties throughout the UK.
In winter numbers increase to approximately 4 million birds, migrants start to arrive from Northern in September to winter in our less severe climate.

Goldcrests occur in many habitat types throughout the UK, however they do prefer conifers and mixed woodlands, in addition to these they will use parks, gardens, hedgerows.
Staple diet consists of aphids and a mix of tiny Insects and spiders. Goldcrests will often hover whilst taking Insects from leaves.