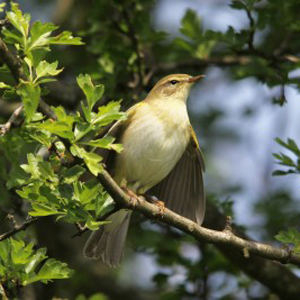 The Willow Warbler is one of two similar looking Warblers that spend the summer in the UK. The other, the Chiffchaff is very similar in plumage, but with care can be separated.

The Willow Warbler is an abundant breeding summer visitor, it arrives from late March onwards and departs September. The breeding population is around 2 million pairs, it breeds throughout Britain and Ireland.