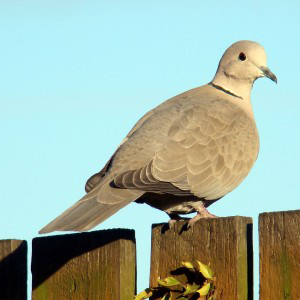 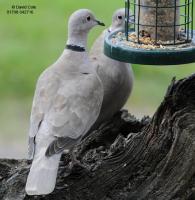 The Collared Dove is a very frequent garden bird and will take food from the bird table, it is more often seen taking the overspill from underneath the bird table. They are elegant looking birds and will parade around the garden, generally in pairs. It is common throughout the UK.

Collared Doves occur in all habitat types throughout the UK, woodlands, parks, gardens, farmland, hedgerows, towns and cities.
In the garden Collared Doves will take spilt Seed Mixes from the ground and will happily use Bird Table with seed on.

In farmland habitat it will be seen feeding on Seed, young shoots and Small Insects.

A very common sound during the spring and summer months, the Collared Dove song is well known even if you don’t recognise it.

The call is soft and has three parts. The second part of the trio is drawn out and the third part the shortest.
‘hoo-hooooooo-ho’.

The following food is favoured by Collared Dove 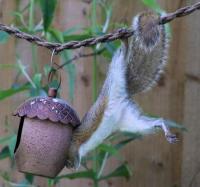