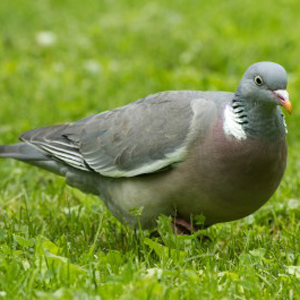 The Woodpigeon is our largest Pigeon, it is a very frequent garden bird and will take food from the bird table and the ground beneath it. They are large dumpy looking birds and will parade around the garden, generally in pairs. It has increased in numbers over recent years and occurs in many habitat types.
It is common throughout the UK.

The Woodpigeon is a very abundant breeding resident in the UK with over 3 million pairs. The Woodpigeon occurs in all counties and habitat types throughout the UK.

The Woodpigeon has adapted well to changes in agriculture and has simply moved into our towns and cities as well as breeding in the more traditional type habitats. Numbers increase in winter as continental birds move in.

Woodpigeons occur in all habitat types throughout the UK, woodlands, parks, gardens, farmland, hedgerows, towns and cities. In the garden Wood Pigeons will take spilt Seed Mixes from the ground and will happily use Bird Tables with seed on. In farmland habitat it will be seen feeding on Seed Mixes, young shoots, Berries and small Insects.

A very common sound during the spring and summer months, the Woodpigeons song is well known even if you don’t recognise it.
The song and has 5 parts and is rather horse in its delivery
The second syllable is the longest and there is a pause between 3 and 4.
‘Who-whoooo-who------who-who’

The following food is favoured by Wood Pigeon