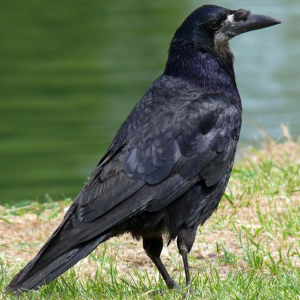 The Rook is similar to the Carrion Crow but is more often seen in agricultural habitats and tends to stay away from our cities and towns.

It is a member of the crow family, 1 of 3 black crows of the region. In juvenile plumage it is very similar to and most easily confused with the Carrion Crow.

The pointers for separation are:

The Rook is abundant throughout all habitat types in the UK. It is a breeding resident in the UK with around 1.4 million pairs. The Rook occurs in all counties throughout the UK, however, it is less numerous in North West Scotland as habitat is a little less suitable.

Rooks occur in a wide variety of habitat types throughout the UK, agricultural farmland is the favourite also woodlands, parks, gardens, farmland and moorland.
They nest communally in large trees, groups called Rookeries, often involving hundreds of nests. They will often feed in large parties looking for insects such as leatherjackets and earthworms; they will also eat carrion, Fruit and Seed Mixes.

Call is a harsh and loud, it is different to that of the Carrion Crow as it is less croaky, it tends not to accentuate the ‘R’s‘ in its calls. ‘keeya keeya’ and raucous ‘caw caw caw’.