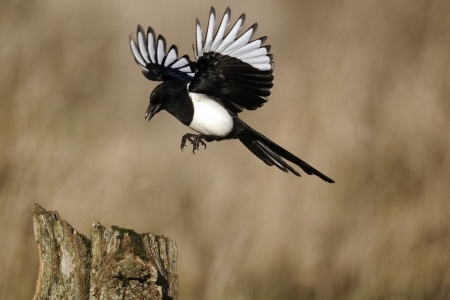 
The Magpie is the most easily identifiable member of the Corvid (Crow) family, its black and white colouration, long tail, large size and rattling call makes it obvious. The rhyme ‘One for sorrow, two for joy etc.’ is quite apt for this species as you very rarely see a single bird, usually they parade around in a small family groups.

Juveniles appear from May onwards and look similar to adults; the only real difference is in the length of the tail, which is much shorter, about half the length of an adult.

The Magpie is a very abundant breeding resident in the UK with over 550,000 pairs. In addition to this there is a large non breeding population. The Magpie occurs in all counties throughout England, Wales and Ireland.
Magpies are far less common in Scotland as they are absent from the Highlands.

Magpies occur in all habitat types throughout the UK, towns, cities, woodlands, parks, gardens, farmland, hedgerows indeed any open country habitat, they are more local in Scotland as they absent in the Highlands.

Magpies will forage for food and will raid nests for eggs and chicks.Their diet includes Insects, carrion, scraps, Seed Mixes, Fruit and Fat Balls . Magpies are not fussy eaters and will have a go at almost anything!

The hard loud metallic rattles and chatters are commonly heard as a troop of Magpies move through. These sound similar to a football rattle.

The following food is favoured by Magpie